July 2006. Will and I took a road trip. It was on the road driving through Monument Valley in Utah that our Ranger girl came into our life.

We picked up a car in Redding, Northern California, and we drove the back roads and byways through beautiful Northern California, Oregon, Washington, Idaho, Canada, Montana, Wyoming, Utah, and back to Southern California. We saw and experienced amazing things; Castle Crags, Hells Canyon, geysers and buffalo in Yellowstone, thunder storms in Arches NP, a hometown 4th of July parade in Troy, MT, the great California Condor, and just the most beautiful countryside ever.

I was driving that day through magnificent Monument Valley in the Navajo Nation Reservation, and as I approached a pull out on the side of the highway I noticed a large mud puddle and next to it what looked like two little pigs. "Are those pigs?" I said aloud. Followed by "oh, no" as I slowed down and pulled off the road. Will and I got out and approached the two puppies at the edge of the mud puddle. It was mid-morning and already sweltering. 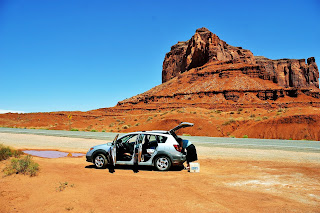 Will searched the area and behind a shrub was a box with two more puppies. Without hesitation we scooped them all up in the box and put them in the back of the rental car.

We didn't know if they would live or die, but if they had somehow made it through the day, they certainly would not have survived the night. Will quickly cut the top off of our water a jug creating a big bowl and I tried to get the puppies to drink. Will took the wheel and we stopped at the first store we found to get food.

The next stop on our trip was the Vermilion Cliffs and we decided that if the lodge was situated in such a way that we could sneak four puppies in to our room, then that's what we would do, and fortunately it was. Once inside they all seemed to be recovering relatively quickly from their earlier ordeal as they ate and drank and then peed and pooped on the tile floor of the bathroom. They were little, about 6 weeks old, but seemed to be in good health, no visible signs of abuse or malnutrition, and the cutest bundles of bouncing joy ever. 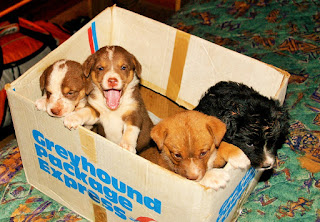 The last stop on our trip before heading home was the Grand Canyon. We were not able to sneak the pups in the lodging there, so after explaining our situation we were directed to a kennel just outside of the park. We were told that abandoned puppies are dumped on the side of the road all the time out there on the reservations.

So our pups spent the night in the kennel and the next morning before heading out to explore the canyon Will and I went to visit them. It was the sweetest thing as all four came running out to us, like they knew us, and trusted us, and loved us, just as we loved them. We told them we would be back for them, that they were coming home with us. I know the pups believed it, I wondered if the kennel operator believed it. 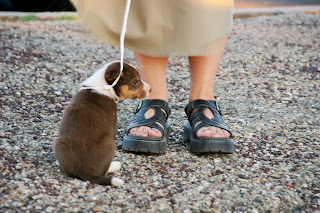 When we picked them up the next day the kennel operator offered to take the little ones off our hands and get them to a shelter. We thanked them, but we had already decided we were going to see this through and take them home.

And Ranger, well Ranger is our beloved! 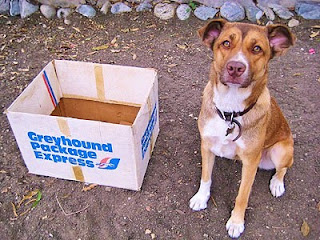 
Posted by Cinnamon Thoughts at 12:54 PM No comments: 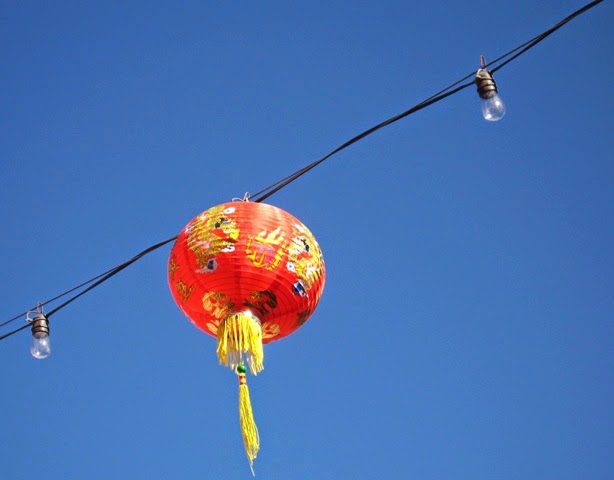 With my Mom settling into her new place, my husband settling into his new position, and me, well, I'm just settling into Spring I guess. The Jacaranda trees are in full bloom, bougainvillaea are bursting, skies are blue and  birds are signing. It's also the tail end of a long weekend with no big plans, nowhere to be, nothing. So what should I do today? I could install that stair rail, but I have to cut, sand, and stain it first. I could get out into the garden and pull/cut all of those pesky saplings. I could rage through the house spring cleaning. I bet Ranger, sleeping on the floor next to me, would love to go for a big walk. So, we'll see. It's early still.
Posted by Cinnamon Thoughts at 8:16 AM No comments:

When Your World is Turned Upside Down

My beautiful Mom's world has been turned upside down. Her car packed with everything she was taking with her, we hit the road in Mrytle Beach South Carolina on Monday 03/24/14, and arrived in Tory Montana on Saturday 03/29/14. The rest of her life as she had known it left behind in South Carolina. 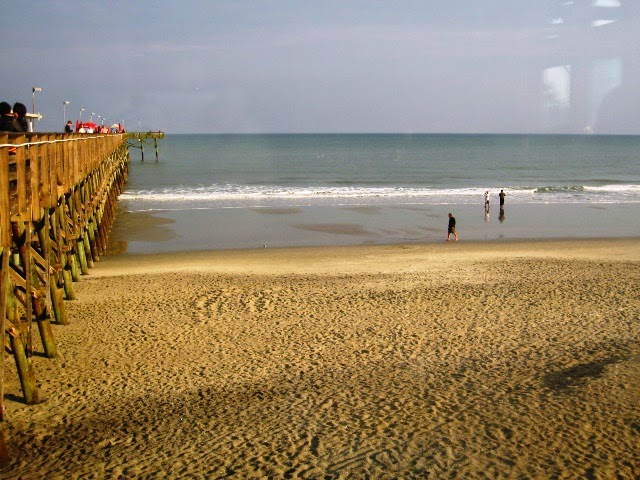 We traveled through areas that she had traveled with her late husband Lorne. The passing miles brimming with the memories of their life together. She was at times quiet and contemplative, Lorne naturally coming up in our conversations. We kept to ourselves throughout the trip, just the two of us, pioneer women, tearing up the road, monitoring the weather, stopping at small towns across America for our lunch breaks, seeing a lot of this country's beauty and making good time. 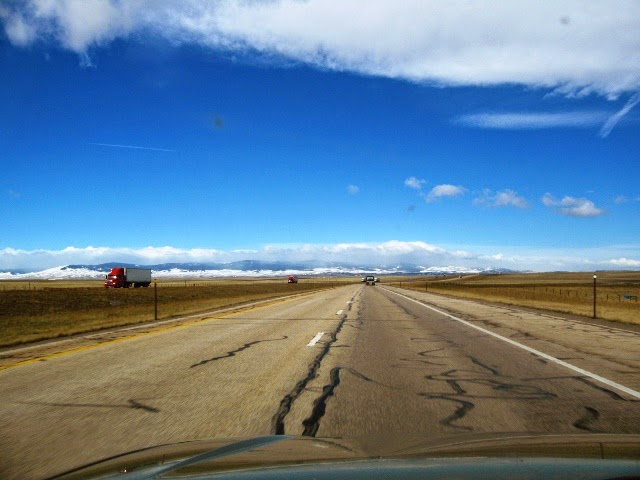 As we got closer to Montana, and her new life without him, it began to hit her harder. Our eyes and hearts brimming with love, life, death, ends and beginnings. I was just happy to be there for her when she needed me.
Posted by Cinnamon Thoughts at 1:49 PM No comments:

As the year rapidly wraps up and I look back at it, I can say it's been another great one. Lot's of those ups and downs and accomplishments and frustrations, sure. They are the facts of life and a part of the whole journey. It wouldn't be life without them.

I know I sometimes let the frustrations mount and I can feel them physically consuming me. But then the path becomes clear and bright, and love settles the score, and it's all good and again. 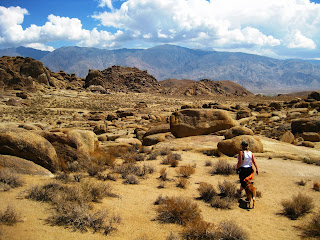 I feel like the year ahead will unfold, and a see-saw of events and momentous occasions, planned and unplanned, will occur. And in the year ahead events to look forward to, and to dread, will present themselves. As long as I nourish my loves, my home, and my own being, and as long as I make good choices and stay true to my needs and my journey, I will continue to move forward in my life with joy. And with all the craziness and uncertainty in the world, I'm fortunate to be able to do so.


Posted by Cinnamon Thoughts at 2:11 PM No comments:

On Saturday Will and I decided to go see the Los Angeles Aqueduct Cascade in Sylmar. It's open to the public for a short period of time to celebrate it's 100 year anniversary. After that we went to Mission San Fernando. It's been wonderfully restored with a great historical museum and a vast collection of artwork, artifacts and furnishings throughout the buildings, gardens and church.

The convento building, completed in 1822, has four foot thick adobe walls and roman arches. In this building I came upon the hospice, a room with three rustic beds and paintings of saints on the walls, and a metal pot on the floor inside the doorway with coins scattered around it. I pulled a penny out of my coin purse and tossed it, it bounced off the floor once and landed right in the pot. And I said a little prayer for Lorne, my Mom's husband, who died of cancer on Thursday.

Lorne was my Mom's third husband. When they retired, they sold their house and hit the road RVing full-time, traveling across the U.S. for several years with their two cats until they landed in South Carolina and settled down there to a quite life on the coast.

Lorne had a quirky sense of humor and loved to tinker with computers and Mom says they complimented each other perfectly. It's been rough the last few year's, but his struggles are over now. And he will be with us forever in our thoughts. 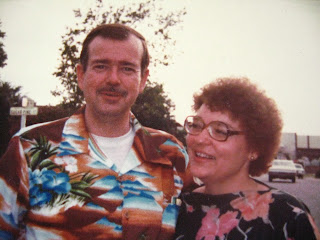 Where There is Boundless Beauty 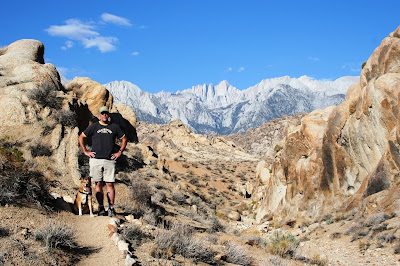 There is boundless beauty in the Eastern Sierra Nevada mountain range and valleys. Including these two; Will and Ranger. We traveled the US 395 from Lone Pine to Bodie and explored many points along the way. 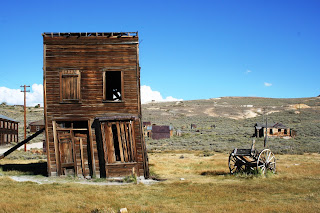 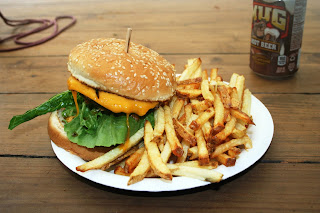 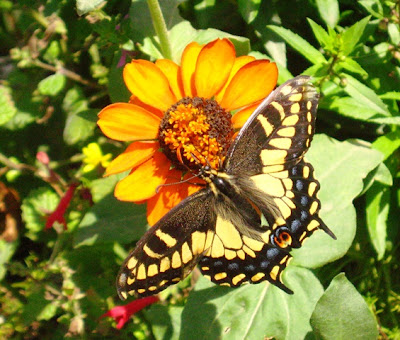 Very nice Sunday visit to the Museum of Natural History to see the Becoming Los Angeles exhibit. While there we traipsed through the Butterfly Pavilion. And completed the afternoon with a stop at Mel's Fish Shack for fried catfish and coleslaw. Then we picked up a peach cobbler from The Cobbler King before heading home.

Photos here.
Posted by Cinnamon Thoughts at 7:16 AM 1 comment: